(MIAMI, FL – 11/16/2015) South Florida SPCA Horse Rescue, one of the nation’s leading advocates for equine legislation and humane protocols, has announced that bodybuilder Alejandro (Alex) Paez, 48, has pleaded guilty to a misdemeanor count of animal abuse after three starving, emaciated horses were found in deplorable conditions at his South Miami-Dade ranch on May 27. He also pleaded guilty to three other counts of animal abuse, which will not appear as convictions on his criminal history. 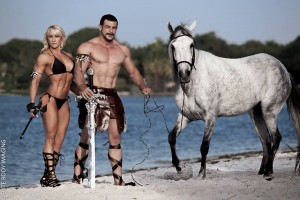 As part of his sentence Paez must serve one year of probation, during which he will not be permitted to own or care for any horses. He is also required to complete 100 hours of community service and donate $500 to South Florida SPCA (SFSPCA) Horse Rescue.

SFSPCA’s Legal Task Force, a collection of attorneys offering pro bono services in civil forfeiture and criminal abuse cases, will be investigating to determine whether a lifetime ban on horse ownership can be imposed, in cases such as this, where the abuse was horrific.

“We appreciate all the hard work that the State Attorney’s office put in to achieve this conviction, but we’re disappointed that Mr. Paez did not receive any jail time. More troubling is that once Mr. Paez serves his 12-month probation, he is free to own another horse. This is a situation where the law needs to be changed. This was one of the worst cases of horse cruelty we’ve seen. Two were down to skin and bone, and all three had hooves so overgrown they could barely walk. This was his second arrest for horse cruelty,” said Kathleen Monahan, president of South Florida SPCA Horse Rescue.

Paez’s attorney, Alexander Michaels, said in an interview with Miami Herald reporter David Ovalle, “his client took the plea to escape the ‘haters and crazy people’ threatening him because of the case.”

“I believe Alex Paez pled guilty in court because the evidence against him was overwhelming,” said Monahan.

PHOTOS: (L) One of the mares seized from the Paez ranch by South Florida SPCA on May 27, 2015. (R) The same mare’s hooves, so overgrown she could barely walk.

On May 27, Alejandro Paez signed over legal custody of the three horses to SFSPCA, which were immediately taken to the organization’s Homestead-based ranch for medical treatment and rehabilitation. Paez’s wife and fellow bodybuilder, Migdalia (Milly) Cowan, 50, was also charged with cruelty to horses. Cowan plans to fight her charges at a trial scheduled for Wednesday, December 16.

Members of South Florida SPCA are scheduled to testify at the trial. “We will be there, along with our supporters, to seek justice for these animals,” said Monahan. “Through our Legal Task Force, we are sending a message to Paez, Cowan and other offenders throughout South Florida: We seek the maximum punishment for these unspeakable crimes, jail and lifetime bans on ownership included.”