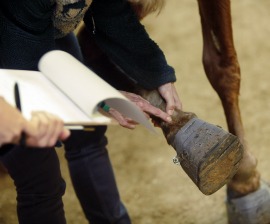 The Horse Protection Act was enacted more than 40 years ago, but the systematic abuse of Tennessee walking horses and related breeds persists. Unscrupulous trainers spend their efforts devising a gruesome array of techniques to make it painful for these gentle creatures to take even a step, so they will lift their front legs extremely high in the unnatural gait known as “the Big Lick,” rewarded by judges at some of this industry’s horse competitions.

Ask your legislators to support the PAST Act »

Wayne Pacelle, president and CEO of The HSUS, said: “Without these strong amendments to the decades-old Horse Protection Act, ‘Big Lick’ show horses will continue to suffer at the hands of unethical trainers and owners who abuse horses to win blue ribbons. We’ve upgraded our federal laws in recent years relating to dogfighting and cockfighting, and now it’s time to do so for horse soring.”

Nancy Perry, senior vice president of ASPCA Government Relations, added: “Soring is a particularly cruel form of abuse as these gentle animals are tortured through the intentional application of intense and chronic pain throughout their show career. The Horse Protection Act was specifically enacted in 1970 to prohibit this abhorrent practice, and yet it is still a pervasive practice in the gaited horse industry four decades later. We thank Representatives Whitfield and Cohen for introducing legislation to protect these loyal horses and bring an end to soring.”

Rep. Whitfield said: “Far too often, those involved in showing the Tennessee walking horses have turned a blind eye to abusive trainers, or when they do take action, the penalties are so minor, it does nothing to prevent these barbaric acts. This amendment does not cost the federal government any additional money and is essential in helping to put an end to the practice of soring by abusive trainers.”

Rep. Cohen said: “In Tennessee, soring horses is illegal and unacceptable. Those responsible for abusing these horses should be punished severely and banned from the sport. How we treat animals is a direct reflection of our character, both as individuals and a nation. There is no ribbon, no prize nor championship worth the price of one’s humanity.”

A 2010 USDA Office of Inspector General audit of the agency’s Horse Protection Act enforcement program found that trainers in the industry go to great lengths to evade detection of the cruelty to which they subject their horses, rather than comply with federal law and use humane training methods.  The O.I.G. audit also pointed out the serious conflicts of interest in the current system, which allows inspectors to be chosen by the horse industry organizations representing the trainers and putting on the competitions.

Find out which celebrities and other horse advocates support PAST »