During the sentencing hearing today, SFSPCA founder and chief cruelty investigator Laurie Waggoner implored the court, “Please don’t let the suffering of these horses be in vain.”

Four horses in varied stages of starvation were seized from Mr. Lopez by Miami Dade Police and South Florida SPCA Horse Rescue on Monday, May 20, 2013, and were taken to SFSPCA’s ranch for care. Lopez was charged with four misdemeanor counts of animal cruelty, and four misdemeanor counts of confinement of animals without food, water or exercise. Lopez was acquitted on the confinement charges, but after 16 continuances, the trial finally commenced earlier this month. 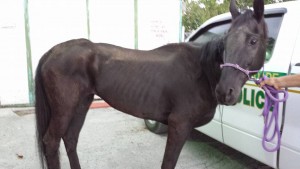 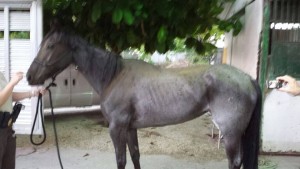 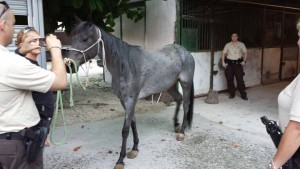 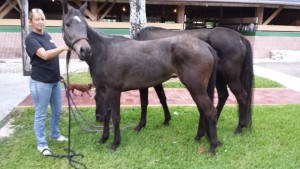 While the organization’s staff and veterinarians worked tirelessly to save the rescued horses (all of which were restored to health and have since been adopted), others spent countless hours fighting for Lopez’s conviction.

“No true horse lover would ever allow his animals to suffer such obvious abuse,” commented State Attorney Katherine Fernandez Rundle.  “The court agreed that this was not some form of carelessness but the crime of animal cruelty.  I look forward to further partnerships with the SFSPCA in the effort to end animal cruelty in this community.”

“Had Mr. Lopez used the funds he spent on his attorneys’ fees and other legal costs to pay for feed, his horses would not have endured their horrific suffering, and neither the civil custody nor the criminal cruelty cases would have been necessary,” said SFSPCA president Kathleen Monahan.

Lawyers for Mr. Lopez say that he will appeal.

ABOUT SOUTH FLORIDA SPCA
South Florida Society for the Prevention of Cruelty to Animals is a private, non-profit 501(c)(3) organization located in Miami, Florida. Founded in 1992, it is dedicated to the rescue, rehabilitation and adoption of abused, neglected and abandoned horses and other livestock. The organization also educates the community about responsible equine care and ownership, and promotes the welfare of equines through local and national advocacy. South Florida SPCA works in partnership with local law enforcement, and receives partial funding from Miami-Dade Animal Services (MDAS)*. For more information about South Florida SPCA, visit http://www.helpthehorses.org.

* Since 2008, Miami-Dade Animal Services Department (ASD) has provided a portion of the funding required to support the South Florida SPCA’s activities for the care and rescue of abandoned horses and other large farm animals. ASD also provides other comprehensive animal services and funding through a number of other programs and support efforts. ASD is now one of the largest no kill shelters in the United States. The new Pet Adoption and Protection Center is located in Doral, Florida. For more information, please visit http://www.miamidade.gov/animals/.