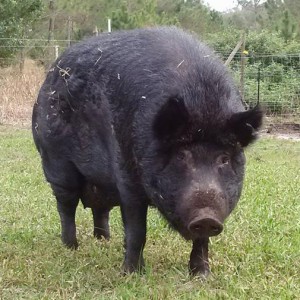 Melrose, FL:  She loves her beauty sleep, and lots of it. A fine dinner, even more. She dismisses those around her with a sniff of her snobby snout. She is a diva, and makes no apologies. She is Phyllis, a large and lovely black sow recently received with quiet fanfare at Rooterville, a sanctuary to over 200 animals near Gainesville, FL.

Phyllis hails from the South Florida S.P.C.A., and is the second pig from the Miami-Dade, FL rescue organization to be given a forever home at Rooterville.

A flashback to Phyllis’s early years provides some insight into her aloof demeanor.

“She just appeared, this wee little thing, one day,” said Jeanette Jordan of South Florida S.P.C.A. “She walked in like she owned the place.”

The coy young Phyllis kept her distance from others, but eventually let it be known she preferred the company of two steers, Lil’ Mac and Cookie Monster. A very odd but amusing love triangle formed, ultimately coming to light in the Miami Herald (Love Triangle Happy Story For Rescue Ranch by Helen Berggren, 2/13/2005).

Phyllis joins approximately 90 other pigs of all shapes, sizes and colors at Rooterville, and a delightful menagerie of other animals that includes a mini horse, an old loving pony, two young cows, three goats, chickens, dogs, cats, ducks, and several turkeys.

“It’s a tragedy that ‘teacup’ pigs are becoming popular as the breeders lie about their size when grown and encourage buyers to nearly starve the poor piglets to death to try and keep them small. Once again, shelters, auctions and places like Craig’s List are full of unwanted ‘teacup’ pigs who have outgrown their owner’s expectations,” explained Elaine West.

Rooterville provides a lifelong home to all its residents in an environment especially created to meet their needs, while they educate the hundreds of annual visitors on all aspects of the food/dairy production system. Upon learning about factory farming 13 years ago, Elaine West became a vegetarian and has become a tireless advocate for the victims of industrialized animal “production.” 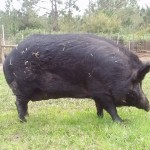 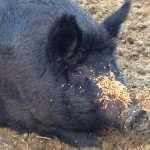 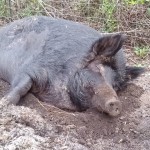