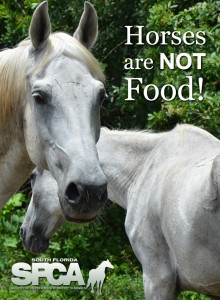 For the first time in eight years, horse slaughter plants were poised to open in New Mexico, Iowa and Missouri. On January 17, 2014 they were stopped dead in their tracks when President Obama signed the Omnibus Spending Bill containing language to defund FDA inspections. Did you know that pro-slaughter advocates categorize horses as “livestock?” We know they’re wrong. So does the FDA. The FDA categorizes horses as “companion (non-food) animals.”

Thanks to all of you who deluged Congress and The White House with your calls, petitions, and letters urging our horses be protected from slaughter. Special thanks to South Florida SPCA honorary board member, Victoria McCullough, for spearheading the anti-slaughter movement. We’re also very proud of Florida State Senator Joe Abruzzo, a long-time advocate for horses.

The battle is won, but the war is not yet over.

Every year more than 100,000 horses are transported to Mexico and Canada for slaughter and sale of meat to Europe. Congress now needs to pass the Safeguard American Food Exports (SAFE) Act (H.R. 1094/S. 541) to once and for all prevent the slaughter of American horses, and their export for that purpose abroad. This Act will seal our borders, preventing our horses being transported to Mexican and Canadian slaughter plants. We’ll keep you posted on the progress of the SAFE Act and let you know when to let loose your emails, petitions and phone calls. We can do it!

How do your congressional representatives stand on key animal rights legislation? How did they vote in 2013?

Find out in the Humane Society Legislative Fund’s Humane Scorecard, and use it to communicate that you care about the humane treatment of animals. There’s also great news about progress made for animals – it’s a must-read at: http://bit.ly/1gfx4u1