Humane Scorecard: See how your legislators stand and voted on animal protection issues 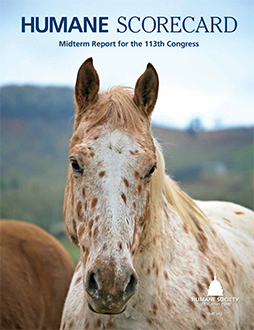 Each year, the Humane Society Legislative Fund (HSLF) publishes a Humane Scorecard of Congress to inform us of every legislator’s record on animal protection issues. We urge everyone to take time to read the recently-published Midterm Report for the 113th Congress, an invaluable resource for staying informed on animal rights legislation. With this information, we can let our lawmakers know we care about the humane treatment of animals by either thanking those who had high scores, or letting them know we are watching and expecting better results from those who scored poorly.

For many, the idea of reading a “report” is eye roll producing, but the HSLF Humane Scorecard is very well-organized, easy to read and to understand. Charts with Senate and House scored items tells us by state and name how our lawmakers voted.

There is a tremendous amount of GOOD NEWS in this Scorecard. Positive gains were made on several key animal protection issues, with the door open for continued progress in 2014. Below is an excerpt from Michael Markarian, HSLF president, on his  blog post dated January 7, 2014:

During the first year of the session, we already had one major bill enacted that facilitates the retirement of hundreds of chimps from barren laboratories to natural sanctuaries, and laid substantial groundwork on a number of other issues—such as protecting horses from “soring” cruelty, doping, and slaughter, and fortifying the federal law against dogfighting and cockfighting—which are teed up for action in 2014. As we look back on 2013 and head into the second part of the two-year Congress, we’re poised for significant gains on several priorities.

Markarian followed with these top statistics in his blog upon the publication of the 2013 Scorecard on January 24, 2014: