Homestead, FL (October 8, 2014)  Ten horses and one very lucky steer were rescued from an illegal slaughter operation in the infamous “8.5” East Everglades on Monday, October 6, 2014. South Florida S.P.C.A. director of ranch operations Laurie Waggoner accompanied Miami-Dade Agricultural Patrol officers to the scene. Gruesome evidence of recent killings included pools of blood on and around a “slaughter tree” (photo) with chains used to secure the ill-fated animals for slaughter, piles of carcasses and mounds of entrails covered by a blanket (photo).

Two miniature horses were kept in a cage (photo), and the crown of a recently slaughtered steer’s head found on the top (photo), dripping blood on the pair. The steer that was rescued, a Corriente (traditionally used for roping) was likely to be killed next according to Waggoner. 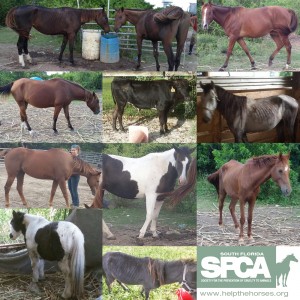 Three off-the-track Thoroughbreds were among the horses rescued: a stallion, a gelding and a mare. The mare was identified as Flattering Irene and the gelding as And He’s Off. Waggoner has not yet been able to identify the stallion by his tattoo. The other horses include two Quarter Horse-type mares, a Paso Fino mare and gelding, and a Paint gelding in addition to the mini horses. Waggoner says at least two of the mares are pregnant.

All the rescues were brought to the South Florida SPCA’s ranch in Homestead, FL, and will be examined today by veterinarian Dr. Zachary Franklin of Templeton & Franklin Veterinary Associates.

To donate toward the care of these animals and others being cared for at South Florida SPCA, click here.

The South Florida Society for the Prevention of Cruelty to Animals is a 501(c)(3) nonprofit organization located in Homestead, FL, and is currently home to 70 abused, abandoned or neglected horses and other large livestock animals. For more information, contact Laurie Waggoner: 786-281-4828 or laurie@helpthehorses.org.