(August 11, 2014) It is with immense joy we announce that after three years and three months at South Florida SPCA, mother and daughter ponies Alice and Ally have finally been adopted together! 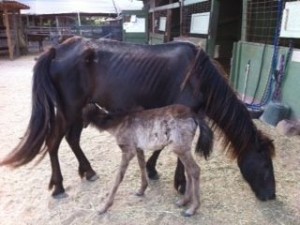 Alice and Ally shortly after they arrived at SFSPCA.

Alice and Ally came to SFSPCA on May 23, 2011.  Little Ally was just one month old at the time, and her mother, Alice, was giving every ounce of her ebbing energy to keeping her baby alive. Alice, an incredible picture of a mother’s dedication, had survived severe malnourishment and starvation during her pregnancy. Now that Ally was by her side, Alice was unable to provide the essential nutrients her little girl needed.

When we found the pair, Ally was already blind in one eye, and partially blind in the other, as a result of malnourishment. As we loaded these two on to our trailer, we couldn’t help but be frightened for their survival. They were both so tiny and frail. Their poor bodies couldn’t take much more. 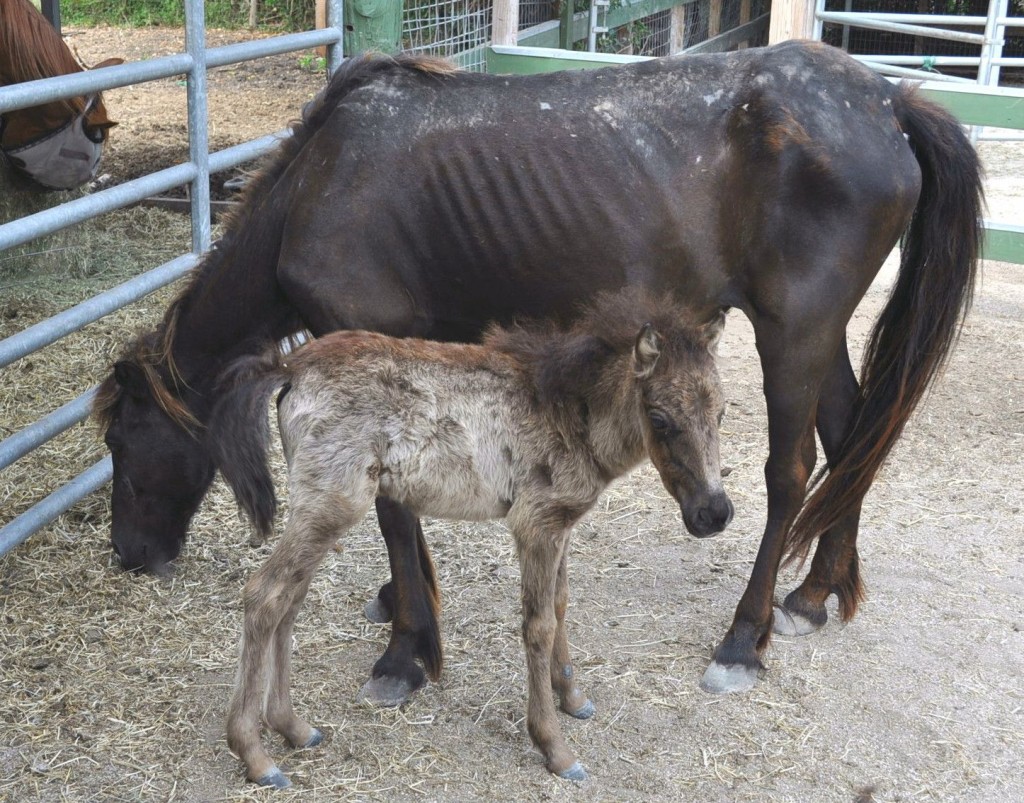 Once in our care, we needed to remove Ally’s blind eye for her safety.  We feared the little one would injure the eye, causing an infection that could potentially end her life in her extremely delicate condition. After enduring so much, we wondered how the filly would adapt to the drastic surgery. 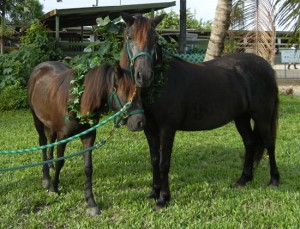 To our wonder and amazement, Ally never gave it a second thought. She opened her heart to us immediately. Tiny enough to fit in our arms, the little filly wanted nothing more than constant hugs. Without an ounce of apprehension or fear, Ally welcomed everyone into her life with an infectious joy.

Mommy Alice was not in the same high spirits. After the extreme abuse she had experienced, no one could blame her. Alice avoided us, keeping her distance and pacing in her stall. However, all the while she shared her precious baby girl with us. Though Alice was scared, she knew we were here to help her and her foal. 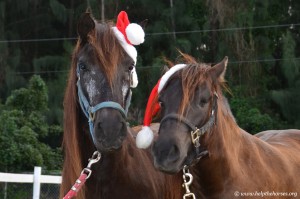 All dressed up in 2013, hoping to make someone’s holiday wish for a pony come true.

Carefree and energetic since day one, Ally became our farm princess. She soaked up attention from any visitor and invented games with the volunteers. The feisty filly even learned to ask for more chest rubs by pawing the ground! Sharing sweet hugs with anyone who wrapped their arms around her, Ally melted everyone’s hearts.

With Ally healed and loving life, we had a chance to focus on earning Alice’s trust. She always maintained her distance from us, struggling to fully trust after being abused. But her astounding dedication to Ally and the courage she showed in keeping her baby alive is nothing short of inspiring.

With such a special pair, finding them a suitable forever home wasn’t easy. Separating them was out of the question–Ally needed her mom to be her eyes. Alice needed someone who had the love and patience to earn her trust.

In their new home, Alice will have the peaceful environment she needs to relax and open her heart, and Ally will have all the chest rubs and hugs she can stand. While it was certainly bittersweet to lead the plump, healthy ponies on the trailer and send them off to their new lives, it was an incredible reminder of why we do this. So we can offer hope. So we can give life back to animals that have fought for their survival. These animals deserve every ounce of our energy, no matter how long it takes.