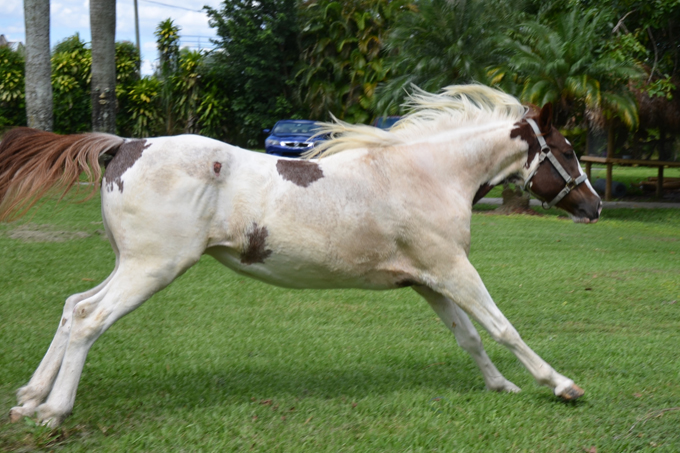 The quick staccato beat of hooves and a flash of white were immediately followed by bemused exasperation – Susie saw the partial opening of her stall as it was being cleaned and decided to make a break for it. Running and romping in the stable yard, she looked like any other recently-freed horse, but Susie is different. Only a few short months ago, the pretty Paint mare was rescued from some of the most horrific conditions the South Florida SPCA had encountered in its 20 years. She and a Paint gelding, later given the name Justice, were found in a nailed-shut stall at a ramshackle boarding facility in Miami Gardens with no food or water for what appeared to be months. With local law enforcement, Laurie Waggoner of SFSPCA literally had to bust down the stall to get to them, and immediately saw Susie had fared worst of the two, down to skin-and-bone and with wounds likely from falling down due to weakness. Evidence indicated that the pair had resorted to eating the wood around them, and even their own waste to survive. Is it any wonder that she wanted to get loose?

Since their rescue on July 7, 2013, Susie and Justice are thriving – the photos of their transformation are nothing short of extraordinary. Their return to health involved tremendous effort and expense, especially for Susie, who required around-the-clock care, IV fluids, and treatments for gastric ulcers for days on end. She colicked frequently, and for a while it was touch-and-go for her. The mare was brought out of the woods over time by Laurie and veterinarian, Dr. Zachary Franklin. While they and other volunteers worked with Susie and Justice hands-on, news of horses’ plight spread and donations toward their care poured in from compassionate followers from all over the world. 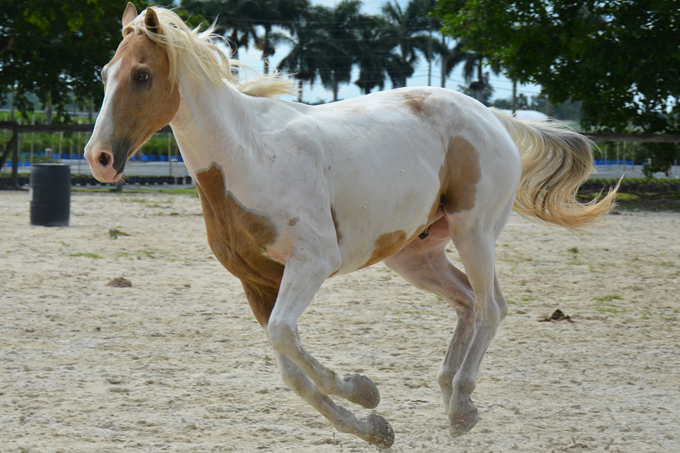 Today, while we still await word on legal proceedings against the owner of Susie and Justice, our focus is on the horses. Justice runs around the arena with Nick and Billy, chasing, nipping and posturing as geldings do, with his golden mane flying and eyes shining, the picture of health. Susie’s coat gleams in the Florida sunshine as she ambles along after busting out of her stall, munching grass and occasionally sniffing noses with others in the paddocks. Mostly, she keeps to herself. Later, when Laurie brings Susie to stand for photos, she acts up, very much like a typical four year-old kid – impatient, and a little bratty. It’s amusing as we see her personality reveal itself. We can only guess at the feelings of bewilderment, betrayal and fear Susie and Justice experienced during their abandonment and confinement. For now, we relish their return to physical and mental health, and remain grateful for the support from so many that enabled us to save them.