Thoroughbred blog ends with one of SPCA’s most remarkable rescues

(JANUARY 8, 2014) Today, Susan Salk announced she will cease publication of her Off-Track Thoroughbreds blog as of Jan. 12, 2015. We at South Florida SPCA are sad to learn this news, and will miss Sue’s uplifting and enlightening stories of life after the track. Several of our rescued horses have been featured on her blog, but possibly none more remarkable than Prodigioso, now known as “The Everglades Horse.”

“My last story for the Off Track Thoroughbreds blog, which will cease publication on Monday, is an update on Prodigioso. Of all the T-breds I’ve written about in the past 5 years, his story is exemplary. He has excelled against the worst odds. And a brief note from me. I have loved every moment and appreciate all the readers, the comments, and the friendships. I will miss you all. Thank you for everything!” — Sue Salk 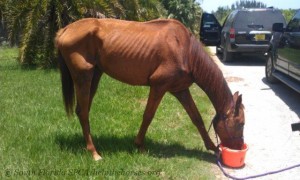 In July, 2012, the off-the-track Thoroughbred gelding was found starved, abandoned and tied by rope to a cement block in the Everglades. He was down to skin-and-bone and was suffering with rope burns, painful thrush in his hooves, and a newly-blinded right eye in the sweltering summer heat. He was brought to South Florida SPCA by Laurie Waggoner and was given immediate care, and was later taken by Celia Scarlett to Florida TRAC (Florida Thoroughbred Retirement and Adoptive Care) for rehabilitation. Prodigioso’s story reached all the way to equestrians Marilyn Lee and her daughter, Robin Hannah in Canada, who ultimately adopted him. Since then, The Everglades Horse’s life has completely turned around, and his story is nothing short of extraordinary. We are grateful to Celia, Marilyn, Robin and all who helped this amazing horse.

Please read Sue’s last blog post below for an update on Prodigioso, and join us in thanking her for sharing his and so many other horses’ journeys. We wish her all the best in her new endeavors!

Prodigioso the Everglades Horse is expected to go big in 2015. On legs so clean they’ve been described as “god given” the chestnut Thoroughbred once left for dead in the bowels of Florida is expected to take center stage on the A-circuit this spring.

Owner Marilyn Lee says Prodigioso will be entered in the Baby Green division of A rated shows, as well as Thoroughbred shows in Canada and the U.S. this coming year, and will be ridden primarily by Lee’s daughter, Robin Hannah. And given his ribbons at Florida HITS and the Royal Winter Fair, and other successes, Lee says she expects his upcoming season to be among his best so far.

Expectations that make her shake her head and marvel at the heart and courage of the little Thoroughbred she and her daughter adopted two years ago, out of the goodness of their hearts.

“We did not take him to be a show horse in the making,” Lee says. “We did it because we had the room at our facility, and if he just needed to live a life of turnout, we wanted to give him that life.”

Mother and daughter reached out to the Florida charity where Prodigioso rehabbed for eight months following a harrowing brush with death, one that left him blind in the right eye, and for a brief time, terrified. They had watched his story unfold on Facebook, beginning with his rescue in 2012 from the Florida Everglades, where he’d been chained to a cement block. Emaciated, burned, and newly blinded, the woebegone ex-racehorse was taken in by Florida TRAC and restored during a painstaking eight months.

Reading his story from afar, and marveling at his spunk, Lee and Hannah offered to take the horse in at their sprawling Ontario facility with the thought that if nothing else, they could give him a good retirement. But after Hannah, an accomplished equestrian, put a saddle on him, the animal proved he was nobody’s charity case. Prodigioso is enjoying a relaxing and chilly winter as he waits for his spring show schedule.

“A judge who knew nothing of Prodigioso’s story wrote last spring that he expected this horse was one who would be going places, really big places, because he has a god-given step,” Lee says. “And the ‘step’ in the hunter ring is such an important thing because it’s their whole way of going. When I read the judge’s comments, and I thought of all the things this horse had been through —he’d been blinded and starved—his legs stayed sound. This was a miracle. Horses go lame with much less than what this horse has suffered, and yet, he has not taken an unsound step.”

In her highly competitive show barn, which contains a variety of breeds and horses, Prodigioso occupies a stall of prominence. Loved by all who meet him, and adored by those lucky enough to get to ride him, the good-natured, trusting ex-racehorse has earned a following and fan club.

“He’s become so spoiled that he now expects a treat from everybody who passes his stall,” she says. “We’ve had to close his door because he’s started to nip people who don’t give him something!”

In her extensive career working with horses, Lee has brought along many, many ex-racehorse Thoroughbreds. But none has come so far as her little Prodigioso. None suffered as much as he did, and yet, remained faithful to humans.

“It makes me cry when I think of how he still trusts people after suffering such extreme abuse at the hands of humans,” she says. “We took him in because we have a conscience, and he showed us something spectacular. It’s like a karmic reward, and I can promise you that this is one horse who will never, ever change hands again.”